Dakota Johnson won't let her mother of her family friends to watch 'Fifty Shades of Grey' because of the explicit scenes she acts out with co-star Jamie Dornan. 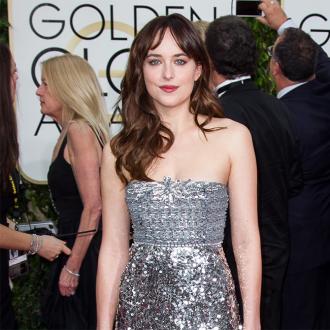 She said: ''My mom came up for a day [during filming]. She's proud of me. But I don't want my family to see [the movie] because it's inappropriate. Or my brothers' friends who I grew up with.''

Meanwhile, Dakota revealed it was difficult shooting the movie with Jamie Dornan, who plays businessman Christian Grey, because there were ''some painful moments'' while they tried to recreate explicit sex scenes on set.

She explained: ''I got whiplash once from him throwing me on the bed; so f***ing painful. And I wish we had a gag reel from the shoot. One time we were doing a scene in Christian's kitchen, and I [thought it would be funny] to hide in a cabinet. I pulled the handle, but it was not a real cabinet. The entire set came down on me.''

While the young star accepted the awkward injuries were all part of the role, she confessed she needed some time on her own in her car and an alcoholic beverage to ''snap out'' of the character.

She told Glamour magazine: ''The fact that I could laugh with [Jamie] was nice. Sometimes I did walk off the set feeling a bit shell-shocked. The drive home from work always helped me snap out of it. And a big glass of wine.''