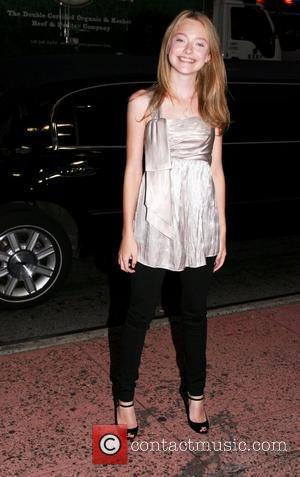 Moviemaker DEBORAH KAMPMEIER is still defending her controversial movie HOUNDDOG a week after it was banned by a leading U.S. cinema chain, insisting her young star Dakota Fanning's rape scene didn't even include physical contact.
The writer/director has been blasted by family groups for featuring provocative scenes with child star Fanning, who plays a nine year old in the film.
But Kampmeier, who has been cleared of child exploitation accusations by officials in North Carolina - where the film was shot, insists she took the utmost care to protect her young stars in all the scenes that have upset critics.
And the controversial rape scene was nothing more than careful editing.
Kampmeier tells WENN, "When you take a shot of Dakota coming in the door, her foot tripping, a boy moving towards the camera, her face saying 'stop,' and you put them together in the editing room you get a rape scene. We never rehearsed a rape scene. She never acted out a rape scene; it's all so technical.
"I was a foot away from her face when we were shooting her face, which is all we have, other than her hands, in the rape scene. I was a foot away saying, 'Hold your breath, hold your breath, don't make a sound. Hold it, hold it, don't make a sound.' And then we'd go into the editing room and we'd remove my voice saying that and have her do an additional dialogue recording session.
"Why is it that people see heads blown off in movies all the time and no one says, 'Oh my God, did they really have their head blown off?'"
And Kampmeier insists another provocative scene, in which Fanning appears to be naked, was not what it seemed either.
She adds, "She had a full piece body suit on that was a nude colour. All you really see is her shoulders.
"Of course she was not naked. I have a daughter; I am a daughter. I cherish and honour the souls of girls and women. If I did anything to harm Dakota or anything exploitative, that would be betraying the whole reason I made this film."