Daisy Lowe's parents weren't impressed when she posed naked for Playboy magazine, and she admits she hadn't thought about the entire world seeing her nude when she agreed to bare all. 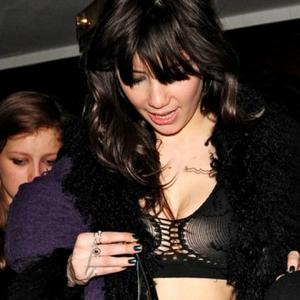 The 22-year-old model - whose mother and stepfather are singer/songwriter Pearl Lowe and Supergrass drummer Danny Goffey, and whose biological dad is Bush rocker Gavin Rossdale - appeared nude in the September edition of the men's magazine but admits she hadn't thought about the entire world seeing her naked when she agreed to strip off in its pages.

She said: "When I did the shoot it was just me and the photographer. I didn't think about the whole world seeing me naked. Everyone can see me.

"My gran was cool and said, 'If you've got it, flaunt it'. But mum and dad weren't so impressed."

While the brunette beauty's family were less than thrilled with her raunchy shoot, Daisy's boyfriend 'Doctor Who' star Matt Smith was "proud" of her.

Matt - who was with his girlfriend at the V Festival at the weekend - told the Daily Star newspaper: "I was really proud of her. She looked amazing."

Daisy recently admitted being "sexy" is a big part of her identity, and she thinks it's important for other women to feel empowered by their sexuality.

She said: "I suppose I've been very in touch with the 'sexy' thing since I was 15. I guess it's a big part of my identity, something that I have learnt to switch into. It's because I'm a girl's girl. I'm not the bitchy girl who's trying to make your boyfriend fancy me. The only reason I ever 'do' sexy is because I like to encourage women to feel sexy about themselves."