Daft Punk condoms to be released

Daft Punk have a new condom named after their hit 'Get Lucky' and featuring a picture of the duo on the cover. 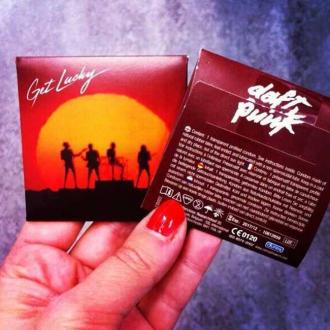 Daft Punk have a condom named after their hit 'Get Lucky'.

The cover and title of the French dance duo's mega hit has been immortalised on the front of the packets of new condoms made by Durex, with the band's logo on the back.

Samples of the prophylactics have been distributed to DJs, and already proved a hit.

US DJ Diplo posted a picture of an open 'Get Lucky' condom packet with the cheeky caption: ''Thank God I had those Daft Punk condoms last night.''

Daft Punk follow in the footsteps of boy band JLS, who released their own brand of 'Just Love Safe' condoms through Durex in 2010, with each band member - Marvin Humes, Oritse Williams, Aston Merrygold and Jonathan J.B. Gill - getting versions with their faces on.

As well as condoms, other planned novelty Daft Punk memorabilia include action figures modelled after Guy-Manuel de Homem-Christo and Thomas Bangalter's robot personas, which they always appear disguised in when they make public appearances. However, so far there are only plans to release the figurines in Japan.