Daft Punk recently admitted that they were a little surprised by the furore surrounding their fourth album, Random Access Memories, confessing that they are struggling to come to terms the huge anticipation surrounding RAM. Speaking as a long-time fan, I can concur with this confusion, after all, where was it when the band brought out the Tron Legacy O.S.T. or Alive? If memory serves right, it wasn't even around when the duo brought out Human After All in 2005. Either way, the French electronic duo's new release is now one of the biggest moments of 2013 and although the duo are quietly confident in their work, an artist's confidence doesn't always translate into a pleasant listen for the rest of us. 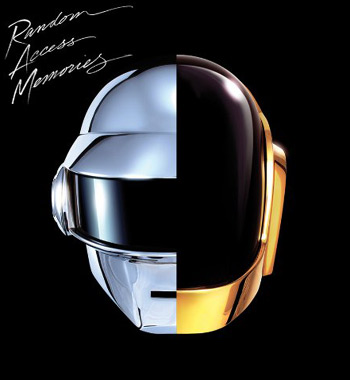 This review doesn't need to talk about first single 'Get Lucky' too much, we've all heard it and we all know that it's an instant classic. The vivacious disco-funk single doesn't come until after the halfway point in the album though, and this effervescent tone isn't really felt on the album until the few tracks before 'Get Lucky' kick in. Ok, album opener 'Give Life Back To Music' contains all the buoyancy of a million disco classics, but the immediate aftermath is a much slower progression, only gradually building until we reach the foot-tappingly good mid-section of the album, where we really begin to hear those sought after disco grooves. The album often drifts in and out of joy and melancholy, and 'Give Life Back To Music' carries both exuberance and a sense of despondency, the closing bars before the song changes to 'Game Of Love,' retaining an inherent sense of sadness, perhaps directed towards the duo's longing for the era where disco reigned supreme, and where their sound was moulded from.

'Game of Love' has all the makings of a brilliant heartbreak ballad, comparing with past tracks 'Something About Us' from their brilliant 2001 album Discovery. But in terms of despondency, the Chilly Gonzalez collaboration 'Within' really stands out as the most heartbreaking track. The opening lines 'There are so many things that I don't understand/there's a world within me that I cannot explain' could stand for so many things, but these 'things' and this 'world' sound as though they are steeped in nostalgia. Daft Punk may be robots, but they are robots with heart.

As well as 'Get Lucky,' 'Lose Yourself To Dance' is another of the album's bonafied disco floor-fillers, again enlisting the help of Pharrell and Nile, and whilst these two really stand out as the most disco-infused tracks, the band never shy away from this brand. R.A.M is as much of a homage to disco as it is an original statement from the duo, as the band have always worn their influences on their sleeves, it's just on RAM that their sleeves are much larger and easier to recognise. But it isn't just the distant past where the duo have taken their influences, and all of the songs sound as though they only belong in the present day. The Panda Bear collaboration 'Doin' It Right' being the perfect blend of EDM and alternative electronic indie, two of the defining genres of our time that the French duo helped establish in the first place.

There are a few songs on the album that are particularly interesting and I'm still finding it difficult to make my mind on whether they are amazing or just really long. 'Giorgio by Moroder' is by far one of the most fascinating cuts on the album, one that even after multiple listens is still hard to decipher; is it a sprawling masterpiece, or is it an over-long self-congratulatory anthem by and for disco's greatest contributors of past and present? Likewise, 'Touch,' which features Paul Williams, is a mammoth, multi-facetted number that breaks up the flow of the album in the same way 'Giorgio by Moroder' does. Both of these songs retain a cinematic quality to them, something that will no doubt have stemmed from their involvement on Tron: Legacy and from working with Williams. But this cinematic experience doesn't just begin and end here; the opener 'Give Life Back To Music,' 'Beyond,' 'Motherboard' and album closer 'Contact' also stand out as retaining a cinematic quality that exists through all of the album. Random Access Memories is meant as a grand statement form the band after all, and their grandiose production really puts this statement into practice.

There are good dance acts out there now, somewhere, offering something a little different, but it isn't out there in the open where everyone can see it. Maybe this is why there is such anticipation around RAM then; Daft Punk have always been at the forefront of electronic music and history dictates that whenever a new Daft Punk album comes out, it tends to influence the next few years of dance music to come, bringing a little something new to the table that will spread out across much of the mainstream. Much of the album, with its throwback elements, seem to be Daft Punk's disappointed response to the current state of the EDM scene - a scene which they effectively helped create in the late 90's/early 2000's. The thing is, RAM is hardly a break from the norm really, it sounds exactly like a Daft Punk album, the stuff they do, and only they can do. The group said in the build-up to the album that they were incorporating influences from the past as well as looking to the future, but haven't they always done that?

So what does that spell for the rest of the EDM? Are things just going to carry on as they were, or will people start looking elsewhere to find a 'new sound'? The album definitely leaves more questions than it answers, but one thing it never does is leave at an anti-climax. Guy-Manuel and Thomas are perfectionists in every sense, and whilst the album itself isn't a perfect listen, it is still a thoroughly rewarding and worthwhile one; and what more could we and the robots have asked for?