Perhaps in the church of Cut Copy the morning prayer goes a little bit like this: 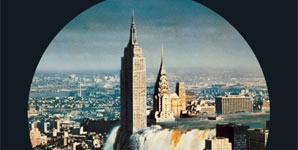 'Our father, who was into synth pop, hallow be thy Moog. They kingdom come, by Fairlight done, on tape, as now it is on ProTools. Worship now those prophets that we knew as gods, who now only flicker all crackly on YouTube; A Flock of Seagulls, Visage, Gary Numan, Kajajaja-goo goo, and finally of course, the legends that are Durran Durran. Amen'

Alright, it's a cheap shot, but whereas on their 2004 debut album Bright Like Neon Love the Melbourne quartet were just fooling around with this thing, Zonoscope proves that Cut Copy are now all so for real on this eighties tip that they've probably each got ink done with 'Yamaha DX-7 4 Life' in some crazy pact.

Thumbing his nose at anybody screaming derivation, founder and chief Copyist Dan Whitford gives himself up to his subject matter with the devotion of a method actor, doing a more than passable take on OMD's Andy McCluskey on opener Need You Now and then topping it for authenticity later on the effervescent winner Where I'm Going. Occasionally this leads to disaster - Blink & You'll Miss A Revolution strays across the fine divide between fixation and pastiche - but the intriguing meld of Kraftwerk and World In Motion era New Order on Where I'm Going manages the deft trick of sounding now, but also...then, if you understand what I mean.

It's probably fair to make the assumption that Whitford and co. are trying to fill the vacuum between now and the next Empire of The Sun album, although this a theory which the plodding fifteen minute closer Sun God almost blows out of the water. But despite lacking generally some of Walking On A Dream's magpie-like inspiration, there is a case for Hanging On To Every Heartbeat's gradual ascent to the apex of modern dance pop as being the first genuine hands in the air moment of year so far. So ladies and gentlemen, boys and girls: if you need a fix of contemporary nostalgia and you need it now, it's time to get down to the church of Cut Copy right away.