Leave it to Hong Kong maestro Wong Kar Wai (In the Mood for Love) to reinvent both the historical biopic and Chinese kung fu action movie in one fell swoop. This is a staggeringly beautiful movie, designed and shot with precision and sensitivity to show both the action and the drama in telling detail. The story of one of the most iconic martial artists in Chinese history, the film is lush and involving even as it's also somewhat overly complicated and hard to engage with. 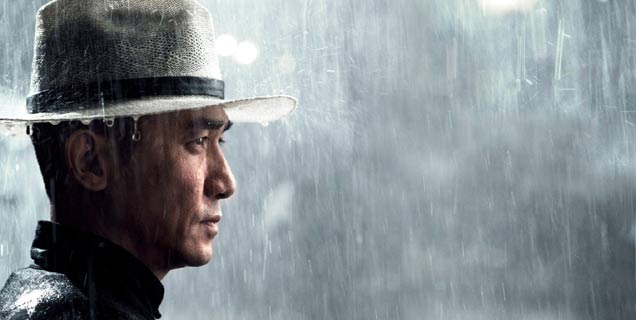 It starts in 1936, when northern master Gong (Wang Qingxiang) travels to the south to investigate reports about Ip Man (Tony Leung Chiu Wai), who just might be the future of kung fu. Intrigued, he offers Ip the chance to become the grandmaster. But Gong's daughter Er (Zhang Ziyi) feels like this is an insult to her family. Then in 1938 Japan invades, and Ip refuses to collaborate with the enemy, which separates him from his wife (Song Hye-kyo) and children. Although Gong's heir Ma San (Zhang Jin) does make a deal with the Japanese, which strongly offends Er's intensely held code of honour. More than a decade later Ip tracks down Er again in Hong Kong; she's working as a doctor while Ip is teaching martial arts. His newest student is the young Bruce Lee.

This story is told through a series of epic hand-to-hand battles, each of which is choreographed in a specific style suitable to the combatants. These details may not be clear to unschooled audience members, but the way Wong shoots and edits the scenes is seriously striking. With lush photography by Oscar-nominated Philippe Le Sourd, the fight scenes have astounding detail, often slow-motion close-ups that make each encounter refreshingly lucid. They're also never overwrought, designed to show the skill of the fighters rather than the usual blood and death. And while Leung gives the film a strikingly cool centre, it's Zhang Ziyi who breathes real passion into the story, lighting up the screen even when she's standing silent and still

Ip Man is a legend in the field of martial arts, best known for teaching Chinese actor and fight Bruce Lee. Born into a prosperous family in Foshan, Southern China, his enthusiasm for his art leads him to the well-known brothel, the Gold Pavilion, which becomes the spot where Gong Baosen renounces his title as Grandmaster in Northern China. Ip is challenged to a fight in order to usurp the Grandmaster title, though against Gong's daughter Gong Er, who is worthy to take up the title? Between the continued threats of Japanese occupation of China, Gong Baosen finds himself amidst a brutal betrayal leading Gong Er on a mission of vengeance. As both Ip's and Gong's personal toils wear on, their futures become uncertain - Ip's only goal is to become China's greatest grandmaster and to teach his disciples the magnificence of his life's passion.

Here's a martial arts film to get excited about, the semi-autobiographical tale of one of China's most famed martial artists in the past hundred years; the legendary Ip Man. The Grandmaster re-tells the story of the legendary South Chinese fighter and his feud with Northern China's fightest fist fighter, Gong Yutian, his decline into poverty following the Second Sino-Japanese War and his eventual rise once again to the top as a fighter in Honk Kong, where he eventually met and trained Bruce Lee.

Watch the trailer for The Grandmaster

In the film, we see Yutian renounce his title as grandmaster in order to challenges Ip (who was picked as South China's representative fighter) to a fight to see who really is the greatest martial artist of their time.

Ip Man was a martial arts legend famous for tutoring the actor and Jeet Kune Do founder Bruce Lee. This movie tells the story of how Northern China's best martial artist Gong Yutian renounces his grandmaster title and challenges Ip (who was picked as the representative of Southern China) to a fight. However, following his dignified win, Gong's daughter Gong Err seeks to restore her family's honour with another challenge. Later, though, their lives are interrupted by the Second Sino-Japanese War and Ip's family is thrust into poverty while Gong Err is forced on a mission of vengeance when her father is brutally killed. Both must choose a new path for themselves to follow - though Ip struggles to make much of a life for himself; standing out against the other fighting talent of Hong Kong proves to be difficult and he must use all his ability to become a great Grandmaster.

Since being released from prison, Ryan Hong (Le) has vowed to live a better life and 'do good' whenever possible. Before his stint in jail, other than a bad attitude Hong didn't have much going for him; that was until he met future mentor Tiano (Van Damme) who taught him unrivalled martial arts skills and gave the youngster a new view on life.

Watch the trailer for Pandorum