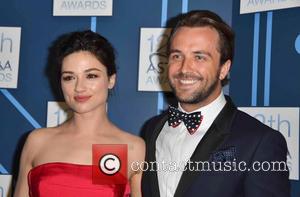 Teen Wolf star Crystal Reed sparked rumours she is engaged to her new boyfriend after she was spotted flashing a shiny ring on her left hand at an awards show in Australia.

The actress split from her Teen Wolf co-star Daniel Sharman last year (13) and she is now dating Tv host Darren MCMullen, the face of Australia's The Voice.

The couple appeared together at the ASTRA Awards in Sydney on Thursday night (20Mar14), and Reed was spotted sporting what appeared to be a diamond ring on her wedding finger.

When asked whether her boyfriend had popped the question, Reed smiled and placed her left hand in her pocket, according to the Sydney Daily Telegraph.

MCMullen told the publication about his girlfriend, "This is the first time we have walked a red carpet together... I think she looks beautiful."