In these highly technological times of Soundcloud, You Tube and saturated inboxes, there's always going to be the odd catch that slips the net. Take 'Idle Labor' for example, a record first unveiled on these shores in April of this year. With the post-Easter festival season taking shape, it's probably the most difficult time to keep up with new releases and as a result, occasional gems such as this find themselves cast aside for later perusal only to remain on the shelf. Thankfully, the shuffle feature on my trusted iPod Classic served up a timely reminder of why 'Idle Labor' and its creators Craft Spells should not be sidelined to obscurity. Despite being relatively unknown outside of their Seattle base at the start of this year, the four-piece have conjured a whimsical masterclass in how to ensure the past sounds like the future in the present. 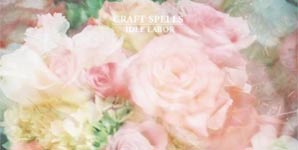 Confused? Well don't be. "If not tomorrow when will it be", sings Craft Spells founder and songwriter-in-chief Justin Vallesteros on the lolloping 'Scandinavian Crush' and it pretty much sums up he and his band's ethos. Although initially conceived two years ago in California as a solo vehicle for his own experimental musings, the Seattle born Vallesteros returned to his hometown and recruited the other three musicians that would go on to form Craft Spells and ultimately set about creating one of 2011's most exquisite long players.

While not a million miles away from fellow bedsit lo-fi kindred spirits Wild Nothing, Real Estate or Beach Fossils, Craft Spells have perfected a sound many have spent years striving to achieve. Despite their tender ages, they've taken the blueprint for the cooler side of 1980s alternative pop and honed it to a tee. Combining elements of New Order's sheen, Fiction Factory's elegant pervasiveness and The Wake's deft melancholia, 'Idle Labor' exacts a lesson in revitalising an era for a new generation without resorting to delusions of nostalgia.

Opener 'For The Ages' might seem like the archetypical Sunday Service choir deviating slightly from 'The Lord's My Shepherd' but underneath its elegiac veneer lies a childlike playfulness nagging away at the chord strings. Several years have passed since Fiction Factory's 'Feels Like Heaven' was cited as a source of inspiration but 'The Fog Rose High' borrows its melody and takes it on a Stateside vacation via late 1980s Bristol. Likewise the upbeat jangle 'From The Morning Heat', where Primal Scream (strictly 'Sonic Flower Groove' era) exchange Byrdsian quips with The Bodines and vice versa. As lovelorn as last year's unannounced contender 'Gemini' and youthfully exuberant as the delightful 'Beach Fossils', 'Idle Labor' makes compelling listening simply by refusing to dwell in one place for too long.

What that means is that four minutes of Orange Juice influenced funk ('After The Moment') finds itself sandwiched between two exquisite pieces of outlandish synth pop ('Party Talk' and 'Ramona') with a percussion heavy attack not too dissimilar in structure or arrangement Kate Bush's 'Running Up That Hill' waiting in the wings ('Given The Time'). Even the cut dead riposte of the snare drum takes its cue from Martin Hannett's 'Unknown Pleasures' vision of Joy Division, ably demonstrated on the winsome yet perky 'Your Tomb'. Better still is the radiant widescreen adrenalin rush 'You Should Close The Door'. One can picture this being the kind of epiphany Alan McGee would have been dancing cartwheels to in the earliest days of Creation Records, such is its infectious beauty. By the time 'Beauty Above All' brings 'Idle Labor' to a plaintive, reverb-laden finale, Vallesteros and his fellow accomplices can be wholly proud of their achievements in crafting one of this year's finest debuts.