Courtney Stodden is worried her DD cup breasts ''will explode'' if somebody hugs her tightly. 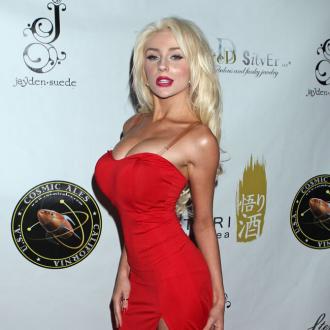 Courtney Stodden is worried her ''boobs will explode.''

The 18-year-old star, who recently had breast enlargements going from a C cup to a DD cup with the support of her husband Doug Hutchinson, 51, is concerned that her breasts may burst when someone hugs her.

She said: ''Doug was against it at first, but it's my body. I adore my shape now. I just don't want anyone hugging me tightly because I'm worried by boobs will explode.''

While her and Doug, who have been married for three years, are still standing strong his sex drive is decreasing while she wants to turn up the heat in the bedroom ''all the time''.

She added: ''We actually went on another show because he's getting older and his libido is going down and mine is very high - I want to do it all the time! It's good when we get together, but it's like once a week and I want it once a day.''

Although the blonde beauty has been asked to pose for Playboy she refused the offer because she doesn't want to sell her body.