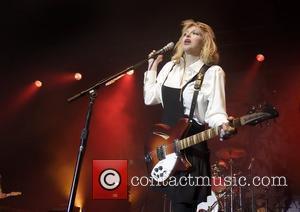 Courtney Love begged songwriter Linda Perry for a beautiful song - but the in-demand hitmaker gave the track to Christina Aguilera instead.
The Hole singer was desperate to record Perry's Beautiful but the former 4 Non Blondes star insisted Love wasn't ready for the attention the ballad would bring her.
The rock star tells MTV, "In my entire life I've never wanted a song fully rendered, that someone else has written - ever... It (song) was 11 years old at the time... and she ended up giving it to Christina Aguilera, but I begged her for it.
"She said to me at the time... 'You're not ready for top 40; you will be. You'll hate this song because you didn't write it' - which is totally true... and then we got into a fierce fight about whether she should give it to Britney (Spears) or Christina.
"She said, 'Someday, you and me are gonna write a song that's better and better suited for you.'"
Perry lived up to her promise when she offered Love Letter To God for Love's new Hole album Nobody's Daughter.
The Hole star adds, "Again it's an old song... She just whipped it out one day."