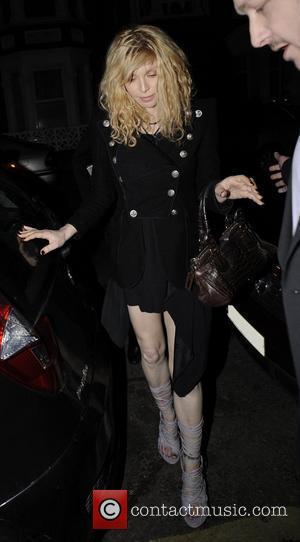 Picture: Courtney Love arriving at the O2 Shepherds Bush Empire to see The Killers and Coldplay in concert. It appears that Courteney has had a few...

Courtney Love is threatening legal action against gaming firm bosses who brought her late husband Kurt Cobain back to life for the latest Guitar Hero release.
Game giant Activision created a Cobain character for Guitar Hero 5, which hit stores on 1 September (09).
The Nirvana star appears alongside Jimi Hendrix, while Johnny Cash also appears with an animated Shirley Manson and Matt Bellamy of Muse in the new game.
The company reportedly received the green light from the tragic rocker's bandmates and widow Love, who is one of the shareholders in Cobain's estate.
But it seems Love didn't approve the use of her late lover's image - she has taken to her Twitter.com page to warn Activision it has a lawsuit on its hands.
On her blog, she writes, "For the record this Guitar Hero s**t is breach of contract on a Bullys (sic) part and there will be a proper addressing of this and retraction.
"We are going to sue the s**t out of Activision, we being the Trust the Estate the LLC the various LLCs Cobain Enterprises."