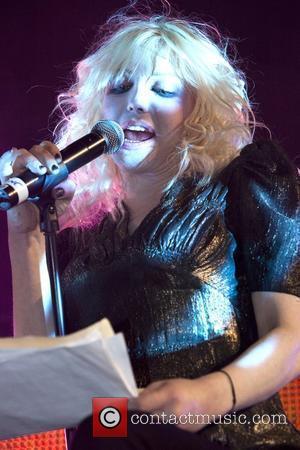 Picture: Courtney Love reading her lyrics while she sings The 20th Anniversary of The Mirage at the Bare Pool Lounge Las Vegas, Nevada - 02.10.09

Courtney Love models her career on her late husband Kurt Cobain's former Nirvana bandmate Dave Grohl.
Love is preparing to make a comeback in February (10) as she embarks on a European tour with Hole, after recruiting a new band line-up and a new manager.
And she admits she looks towards Foo Fighters star Grohl as a model of success.
She tells Britain's NME magazine, "I look around and I look at (Dave) Grohl. He's clean, his businesses are clean, he's clean, there's nothing corrupted, it's just... clean. I wish I had his lawyer but I don't.
"At the same time I feel like we have that kind of manager now that will keep things clean and who gives a s**t. It's always about betting on me. You can't just take me on because there's someone who's deceased (Cobain) and they make money. You have to take us on because you believe in us first...
"We have a great manager now and I feel we've landed on a nice island and we've gotten to the shore."