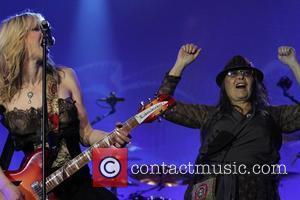 Courtney Love is facing yet another legal wrangle with a former assistant, who alleges the rocker asked her to break the law and counterfeit legal documents.
Jessica LaBrie has filed a lawsuit in Los Angeles, claiming Love intentionally withheld her salary because she refused to "commit fraudulent, unlawful, and unethical acts."
LaBrie also alleges her former boss asked her to hire a computer hacker, but has not gone into details.
In the legal papers, obtained by Tmz.com, LaBrie claims she worked for the Hole singer from June 2010 to July 2011, and was eventually forced to resign because Love wouldn't pay her.