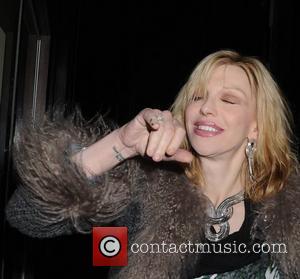 Never one to be out of the limelight for very long, Courtney Love recently announced that she has signed a publishing deal with HarperCollins to write a 'no-holds barred' memoir, with Anthony Bozza. Bozza is a regular Rolling Stone scribe and has previously tackled the lives of Tommy Lee and Slash in autobiographical form.

Any casual observer would be forgiven for assuming that Courtney Love was known simply for being a hell-raiser, always busy kicking up the sands of controversy. Of late, she has made the headlines more for her questionable parenting skills (her daughter, Frances Bean has been taken from her care on many occasions and, in more recent years has been said to have cut herself off from her mother of her own accord) than for her music.

Similarly, most people would find it easier to name one of Courtney's ex-lovers than to recite the lyrics to one of her songs. Most famously, she was married to the late Kurt Cobain (of the grunge band Nirvana) but she has also been known to date, or have some romantic involvement with the actors Edward Norton and Jim Carrey and a number of musicians, including Alex James of Blur, Smashing Pumpkins' frontman Billy Corgan and, somewhat unexpectedly, the comedian Steve Coogan. The words 'Courtney Love' and 'groupie' have been strung together on many an occasion. 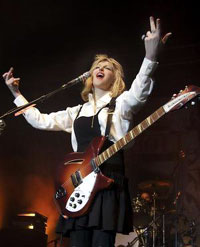 However, for many music lovers, Courtney Love is a role model and worthy musician in her own right. Keen to dispel the myth that Courtney was riding on her husband's coat-tails, plenty of her fans will point out that Pretty on the Inside - the debut album from her band, Hole - out-sold Bleach (Nirvana's album, released at around the same time) on its initial release.

Along with bands like Babes In Toyland (of whom Courtney was also once a member), Hole bridged the gap between the ultra-feminist riot grrrl movement and grunge, helping to bring both to the attention of the mainstream media. Hoards of young women copied her 'babydoll' image: her bleach blonde hair, dark red lipstick and vintage dresses (often worn over ripped tights) were notorious and thoroughly synonymous with the sound that she helped to make so popular. Live Through This, the second album from Hole, has become one of the iconic albums of its era, as has the follow-up, Celebrity Skin, which was hailed for its more accomplished, 'Courtney-goes-Hollywood' sound.

She's also a highly intelligent and well-read woman. There aren't many rock stars out there that can quote freely from the works of Euripdes and Shakespeare. And few people could deny Love's determination and ability to speak her mind, with confidence and gusto.

Courtney has always attracted (and courted) controversy, though. Like many outspoken women in the music world and beyond, her failures have always been magnified and her accomplishments scrutinised. She was heavily criticised for releasing Live Through This so soon after Cobain's death and furthermore, accused of cashing in on her own personal tragedy. In actual fact, the album was intended for release the week after Cobain committed suicide but was obviously postponed. When questioned over the fact that many of the lyrics seemed to dwell on the theme of loss and the macabre, she simply replied "I'm not psychic but my lyrics are."

Some of Courtney's detractors went further in their criticisms and accused her of being responsible for and involved in Kurt Cobain's death. Even her own father has publicly declared his belief that she was involved in his demise. The documentary maker Nick Broomfield investigated the claims in the film Kurt & Courtney but no conclusions were drawn from his enquiries.

Those that defended her were given a dwindling supply of source material on which to base their arguments. Aside from some impressive, award-winning acting (in Milos Forman's The People Vs Larry Flint and the Andy Kaufman biopic The Man on the Moon), Courtney's creative output suffered from a distinct lack of critical acclaim. After a changing line-up (Melissa Auf Der Maur joined Smashing Pumpins before going solo and Patty Schemel was replaced by Samantha Maloney), Hole eventually disbanded. Courtney's subsequent solo album (aided in part by co-writer Billy Corgan and producer Linda Perry) received lukewarm reviews and sales were disastrously low in comparison to the band's former output.

In 2009, Courtney Love announced that Hole would be reforming and recording a new album. When it finally happened, the 'reformation' consisted of Courtney Love and no other original band members. Whilst some were happy to see Courtney back on stage, to others, the new shows simply acted as proof that Hole was very much a band and not just The Courtney Show. Without Eric Erlandson on guitar, Patty's notorious drumming or Melissa's expert bass-playing, the new 'Hole' wasn't really up to scratch.

As the new band promoted the album, Courtney's music was still overshadowed by her personal life; her turbulent relationship with her daughter Frances Bean spilled over onto the social networking site Twitter and became a spectacle, for all to see. Financial wranglings with Nirvana members Dave Grohl and Krist Novoselic also turned public and ugly. Whilst Courtney was busy arguing that she simply wanted the money for the benefit of her daughter, she was also open about her own fiscal problems, though somewhat confusingly, frequently tweeting about her property purchases and her collection of expensive vintage dresses.

After the relative disinterest in the new line-up of Hole, is this autobiography Courtney's last-ditch attempt to remain in the public eye? After all, she has already released Dirty Blonde - a hefty collection of her diary entries, lyrics and personal photos in 2006. How much more of herself does she need to lay bare in order to bankroll her lifestyle? Is she in danger of erasing any positive cultural impact she's had, if she continues to play into the hands of the media, who rarely miss an opportunity to mock her? Or, perhaps, in writing the autobiography, she is allowing herself to have the final say on the controversy surrounding her dramatic past and finally getting the chance to tell her story in her own words, as opposed to having it filtered through the pen of a journalist?

Courtney has never been known for her timekeeping but the rumours are that the book is scheduled for release in Autumn 2012. We will have to wait until then to see if it kills her credibility or kickstarts her career again.