Courteney Cox was nervous her estranged husband David Arquette was looking for men to date when she discovered gay hook-up app Grindr on her iTunes account. 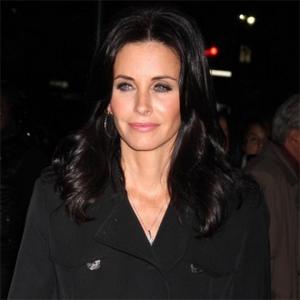 Courteney Cox was worried David Arquette was gay when she thought he had downloaded an iPhone dating application.

The 'Scream 4' actress - who is currently separated from her husband - became nervous when she saw someone had downloaded Grindr, a phone app which allows gay men to see other gay men nearby, on her iTunes account, and she automatically assumed it was him.

Speaking on 'Jimmy Kimmel Live', she said: "I was going on to the iTunes store to buy some music just the other day and I'm so behind the times I was buying a song and it said, 'You've already purchased this.' I was thinking to myself, 'No I haven't.' And then I thought it must be David because we have the same account.

"So I went on to view the history to see what other songs he had downloaded because he's hip! And I was like, oh wow, there's a lot of books. Then there were some songs and then it said, 'Grindr, to find the same sex in your area.'

"And I was like, 'Wow, what if you actually don't know the person you've been with for that long.' What if David is buying Grindr? It's a gay website where you punch something in and see if there's another guy in your neighbourhood."

However, the 46-year-old star - who has six-year-old daughter Coco with David - was relieved when she found out it was her assistant, although he initially denied it.

She laughed: "So I called up my assistant who happens to be gay and I asked him, 'Did you happen to buy a thing on our iTunes thing.' He said, 'Nope!' And I was like, 'Really, you didn't make one purchase?' and he just said, 'No Courteney.' And I'm saying, 'Come on buddy, I won't get mad, just tell me about it! You got one thing, you got Grindr!' and he was like, 'Oh yeah, yeah, that was a free app!' And I was like, 'Thank you.' That would have been so terrible."