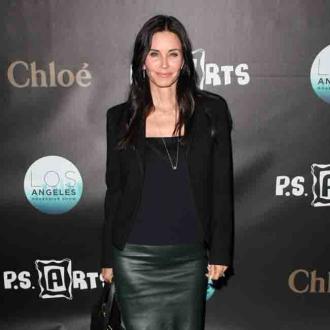 Courteney Cox and Johnny McDaid have been dating for two months.

The 'Cougar Town' actress and the Snow Patrol rocker went public with their romance last week at her friend Jennifer Aniston's annual Christmas party, but they have reportedly been secretly going out for a while after meeting through mutual friend Ed Sheeran, who has been staying with the former 'Friends' star in Malibu, California, while working on his new album.

A source told Grazia magazine: ''Ed decided to set them up. They got on amazingly and have been dating ever since.''

Friends are delighted for the actress, as they say she had been feeling down since her divorce from David Arquette - who she split from in 2010 after 11 years of marriage - was finalised in May.

One insider said: ''Johnny came along at the right time. Courteney is happier than ever.''

The 49-year-old actress - who is 12 years older than her new boyfriend - has a nine-year-old daughter, Coco, with her ex-husband.