Courteney Cox Opens Up About New Boyfriend Johnny McDaid: "He Supports Me In Every Way"

The pair gushed about their romance when attending the premiere of the 49 year-old actress's directorial debut, 'Just Before I Go.' 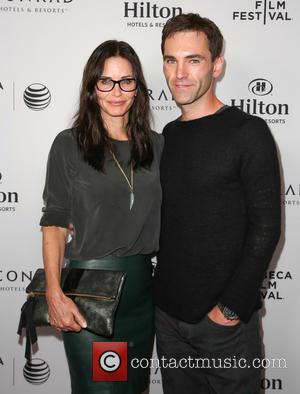 The 49 year-old actress and her Snow Patrol musician beau hit the red carpet together in New York City for the premiere of her directorial debut, 'Just Before I Go', on April 24th.

The pair were anything but shy when it came to showing off the affection they feel for each other, and when asked about their romance, Cox couldn't help but gush about how happy she is.

"He supports me in every way," the former 'Friends' star told Us Weekly at the Tribeca Film Festival on Thursday.

"He supports me creatively," she added. "He really believed in the movie...and not just because he likes me, though I know that helps."

In fact, McDaid liked the upcoming film so much that his band wrote three new tracks for it.

"We get to kiss between takes," the 37 year-old Brit added, when referring to working with Cox. "Courteney is the most completely confident person I've ever met - at everything."

The couple, who first went public with their relationship last December (2013), are even planning what their future together holds, including marriage and children.

A source revealed to the magazine a wedding is likely to happen "sooner than later," adding, "They are talking about having a child together."