Courteney Cox celebrated her 50th birthday by relaxing on a beach on the Turks and Caicos islands with her boyfriend Johnny McDaid. 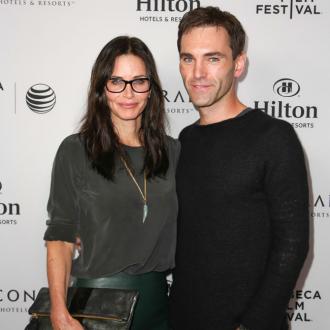 Courteney Cox spent her 50th birthday on the beach.

The 'Cougar Town' star has been enjoying a ''romantic'' vacation with her boyfriend Johnny McDaid in Amanyara in the Turks and Caicos Islands and celebrated her landmark birthday on a ''secluded'' part of the beach.

A source said: ''Courteney's birthday was Sunday (15.06.14) and they spent all afternoon on the beach. It was just the two of them and they found a secluded spot in a cove.

''It was very romantic and a beautiful setting for the afternoon. They shared a green cocktail and took a nap side by side. Courteney looked like there was nowhere else in the world she would rather be and just so happy to be doing what she was doing.''

The onlooker claims 37-year-old Snow Patrol musician Johnny was very affectionate towards his girlfriend - who has 10-year-old daughter Coco with ex-husband David Arquette - and added that the couple appeared very into one another.

He told E! News: ''Johnny was doting on her, rubbing her leg and passing her a cold towel when she got hot. They seem very happy together and totally in love. After a long afternoon in the sun, they went back to their room for the night.''