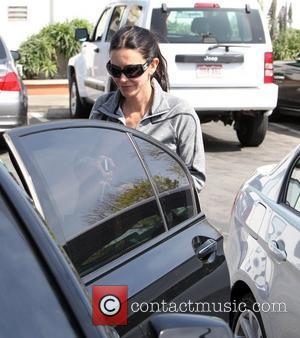 Actors Courteney Cox, Busy Phillips and Josh Hopkins are celebrating after finding a new network to call home for their U.S. comedy Cougar Town.
The TV sitcom's future has been in jeopardy over the last few months, with Cox and Phillips famously launching independent promotional campaigns in a bid to boost ratings amid fears the show, which premiered in 2009, was facing cancellation.
The Friends star also took a stand against ABC network bosses and accused them of failing to properly market the series, but on Thursday (10May12), it was announced that executives had landed a deal with rival channel Tbs to give the show a new lease of life.
Cox and her co-stars are overjoyed at being given the chance to make a fourth season of the comedy and they wasted no time in taking to Twitter.com to share the news with fans and thank them for their continued support.
An excited Cox writes, "Cougar Town is moving to Tbs!! So happy we get to continue making our show! We cannot thank you all enough for your support. Seriously, guys. Thank You".
Phillips tweeted, "It's Official: Cougar Town Jumps From Abc to Tbs in Two-Season Deal," and Hopkins added, "CougarTown trending world wide. Thanks all".
Cox's estranged husband David Arquette, who serves as the show's co-executive producer and makes a cameo in the upcoming season finale on 29 May (12), also raved about the news, posting, "Attn (attention) Cougar town fans... Thanks for your support - thank you Tbs".