Lea Michele is reportedly much ''less miserable'' now she is dating her 'Glee' co-star Cory Monteith. 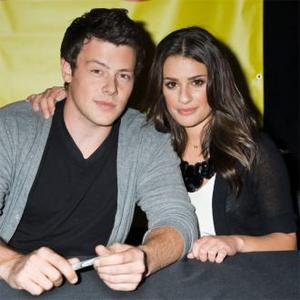 Cory Monteith is having a ''positive effect'' on Lea Michele.

The 'Glee' co-stars have been dating since earlier this year and insiders on the set of the musical drama say the actress - who split from her long-term boyfriend, Broadway star Theo Stockman, last September - is now much happier because she isn't struggling with a long-distance romance.

A source told Us Weekly magazine: ''Cory is definitely having a positive effect on Lea. She's much less miserable these days.

''Even when she was with Theo, she was always depressed being so far away from him and not getting to see him. She likes having someone with her that's actually there. Long distance is not her thing.''

Last weekend, Cory, 29, accompanied the 25-year-old beauty on a trip to New York because Lea couldn't bear to be parted from him for a few days.

The source added: ''They had a great little quick trip in New York. Lea didn't want to be away from him for just those few days.''

Last month, Cory took Lea home to Canada and the pair were spotted enjoying a cosy sushi dinner date in the actor's home city of Vancouver.

An eyewitness said: ''They came in Saturday night for dinner. Cory is well known here because he comes in all the time. They sat at a table at The Front of the restaurant in the corner. They wore hats and both ordered Ichi rolls.''

The pair - who were also seen having a romantic meal in Los Angeles on Valentine's Day (14.02.12) - managed to keep a low profile before leaving a generous tip.