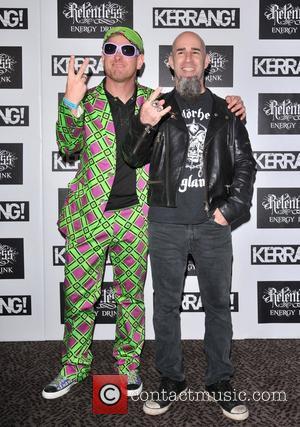 Rocker Corey Taylor is thrilled to be organising Randy Blythe's stage comeback at Slipknot's inaugural Knotfest, calling the upcoming gig the "icing on the cake" after the Lamb of God frontman's release from prison in the Czech Republic.
Lamb of God's scheduled appearance at Knotfest, a new metal festival hosted by Slipknot, was thrown into jeopardy after Blythe was locked up in Prague for more than a month in relation to the death of a fan in 2010.
Blythe was freed last week (02Aug12) and confirmed he would appear at the shows in Iowa and Wisconsin later this month (Aug12), and Slipknot's Taylor admits he was relieved to hear the good news because he felt helpless while his pal was behind bars.
He tells RollingStone.com, "Randy's been a good friend of mine for a really long time, and it was killing me, being a friend and being in this position in the industry and whatnot, there wasn't a lot we could (do) for him. We were kind of running all over hell and back trying to figure out if there was anything we could do for him, not just because of the Knotfest show, but because he was our bro (brother).
"Even if he landed (back in the U.S.) and he said that he didn't want to do the shows, I would still be so happy that he's home... The fact that Lamb of God is going to play Knotfest is icing on the cake for me."
Taylor also praised Lamb Of God's loyal fans for rallying together to back the star while he was behind bars, adding, "I'm really proud of the metal fans for giving their support and doing everything they can to get the word out and get as much focus on that situation as possible. I'm really proud of them for that and sticking with it, and it's paid off - he's coming home."
Blythe has vowed to fight allegations of manslaughter if he is made to face trial in the Czech Republic at a later date. He previously insisted he remembered little about his band's Prague show in 2010, when he allegedly pushed a male fan offstage. The 19 year old reportedly died of a brain haemorrhage several weeks later.