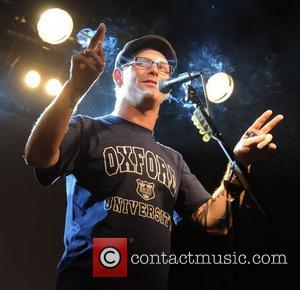 Slipknot frontman Corey Taylor has taken aim at fellow rocker Scott Weiland for recording a Christmas-themed album, branding the star's new project "lazy".
Weiland, who is the former frontman of heavy rock outfit Velvet Revolver, announced earlier this year (11) he was to release The Most Wonderful Time of the Year, a record of traditional festive tunes.
The idea has angered Taylor, who accuses Weiland of settling for an easy way to make money during the festive season.
During a gig in Indiana on Monday night (28Nov11), he ranted, "More and more people are only interested in money than f**king doing anything that's good. I'm not saying everyone, but there's a lot of f**king people out there who would rather just take your money and leave you with nothing.
"I'll give you another example. Does anyone know who Scott Weiland is? Do you know that Scott Weiland has a Christmas album now? Oh, it's bad. It's bad... There is a video online of him singing, and he's very serious. Because Christmas is serious. His hair is all slicked back and he's in his s**tty tuxedo.
"It's not that he's a bad singer, 'cause he's not... I love some of the s**t that he did with Velvet Revolver. It's not that he's a bad f**king singer. He's a lazy piece of s**t, is what he is at this point."