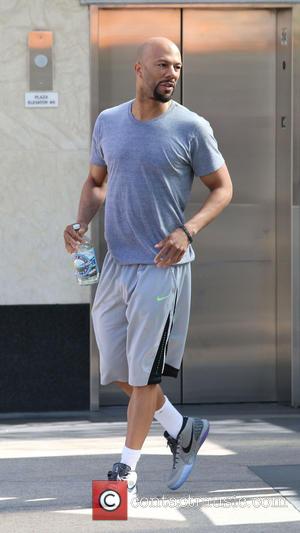 Rapper/actor Common was a big winner the night before he picked up his first Oscar last weekend (22Feb15) after his manager presented him with a one-of-a-kind golden Air Jordan shoe.

A huge Jordan fan, the Selma star was handed the rare piece of art at a party on the eve of the Academy Awards and admits he'll cherish the gift - but it isn't his most expensive memorabilia.

Common explains, "I have a pair of Jordans given directly (to me) from Michael Jordan when I was a ball boy in Chicago (for the Bulls)... These were his first pair of Air Jordans, he signed them. I gave them to my father and my father gave them to my sister. They're very valuable."

Common admits he tried to get rich off Jordan during his time as a Bulls superstar, but stumbled at the first hurdle.

The rapper adds, "Somebody asked for his autograph and I charged the guy, like, $5 - I was a little kid, I needed lunch money. So I went and I said, 'Look Mike, can you sign this for this kid?' And he was like, 'You sign it...' I signed it, took it back to the kid and the kid looked at it and said, 'Wait, this is not Michael's autograph!' I was like, 'How did he know?' I spelled Michael wrong."