Allen's influence isn't invisible but the critics have agreed: MITM is lacking something,,,

In ‘Magic in the Moonlight’ - the latest comedy from Woody Allen – Colin Firth applied his bumbling British charm to Stanley (alias: Wei Ling Soo), a British stage magician and master illusionist, brought to the French Riviera to showcase his talents in the 1920s. He is charged with unmasking Emma Stone’s Sophie, a so-called spiritualist who is suspected of exploiting a rich family with her faux clairvoyant ways. 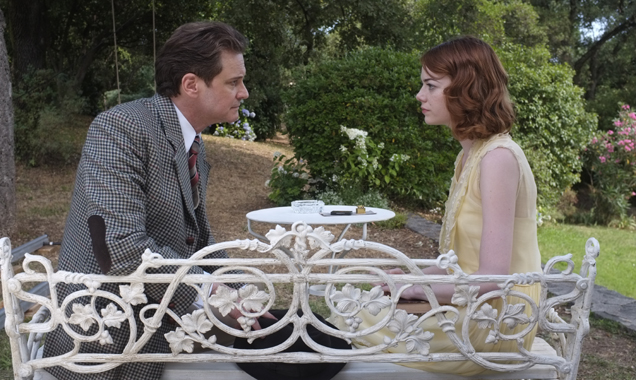 Colin Firth and Emma Stone filming Magic in The Moonlight

Unfortunately, Allen hasn’t been able to create the same fervent critical buzz that surrounded his latest major project, Blue Jasmine. The reviews have been filed, and ‘Magic in the Moonlight’ currently holds a rotten rating of 55% on Rotten Tomatoes.

“For all the Mr. Darcy-ish charm Woody's latest surrogate, Oscar winner Colin Firth, can still summon up, it's hard to believe Allen's current muse, played by Emma Stone, would put up with his insults for 10 minutes,” writes Lou Lumenick for The New York Post.

More: Is Emma Stone Really Being Haunted By Her Ghostly Relatives?

“Magic In The Moonlight, has a slightness that would be perfectly at home at the bottom half of a ’30s double bill,” suggests The A.V Club’s Ben Kenigsberg. “The film begins in 1928 Berlin, and from the first frame, the flood of period details is so intoxicating (the production designer is Anne Seibel) that it almost doesn’t matter that, unlike in Midnight In Paris or To Rome With Love, the comedy is a good 30 or 40 percent less fizzy than it needs to be.

It’s “A film of obvious characterizations and even more obvious plot machinations that render its moment-to-moment charms moot,” claims David Lee Dallas of Slant Magazine, while David Thompson of The New Republic thinks “Magic in the Moonlight is awful and unnecessary. There is no magic, no moonlight, no chemistry, and no impediment to 98 minutes seeming like a day and a half.”