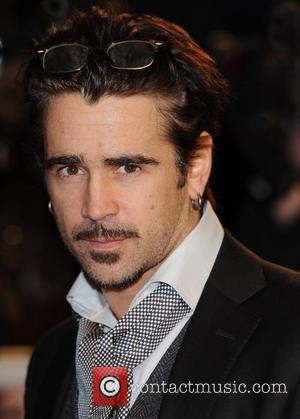 Picture: Colin Farrell at a photo call for The Way Back at Claridge's Hotel London, England- 08.12.10

Colin Farrell spiralled into a deep depression after his blockbuster Alexander flopped - and even considered turning his back on acting for good.
The Irish actor starred as Alexander the Great in Oliver Stone's 2004 epic, and was crushed by the negative reviews his performance generated.
Farrell subsequently fell into a slump and admits he felt the need to apologise to everyone who might have seen the movie.
He recalls, "That was tough. I say tough relative to a charmed life, but I'm not going to apologise for how much it affected me emotionally and psychologically. I was going to walk away from acting. I couldn't even buy a packet of cigarettes without feeling like I needed to say sorry to the guy behind the counter just in case he happened to see the thing."
The star became even more withdrawn following the box office failure of Miami Vice in 2006.
He adds, "I just completely fell to s**t on that one. It was literally the first time I couldn't say to anyone around me, 'Have I been late for work, have I missed any days, have I been hitting my marks?' Because the answers would have been yes, yes, and no... I lost the ability to be confident that I could make a change myself."
When the film wrapped, Farrell managed to turn his life around after a stint in rehab.