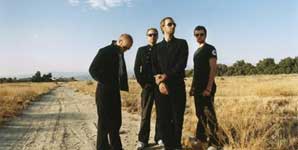 'Talk' is the third single to be taken from Coldplay's multi-platinum third album 'X&Y'. Borrowing the riff from Kraftwerk's 'Computer Love', the utterly hypnotic 'Talk' is driven by Will Champion's insistent, metronomic beats and Jonny Buckland's ethereal chiming guitars. 'Talk' is available as a two-track CD, a DVD and 7 inch. The CD includes the brilliant new song 'Sleeping Sun'. The DVD contains Coldplay's version of 'Gravity', a song they wrote whist on tour in 2003 that became a huge hit for Embrace last year. The DVD also includes the Anton Corbijn-directed video for 'Talk', the Mark Romanek-directed video for 'Speed Of Sound, and some new behind-the-scenes footage of Coldplay on the 'Talk' video shoot.

Recent recipients of two MTV Europe Music Awards (Best UK & Ireland Act, Best Song for 'Speed Of Sound') Coldplay are currently on tour in Europe, reaching the UK in mid-December where they will play: