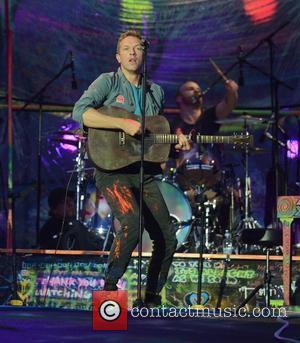 The Coldplay tour gross has reached a hefty box office total of $99.7 million, reports Billboard.com, making it No. 1 on their latest ranking of top-grossing tours.

Coldplay, embarking on a mammoth North American and European world tour to support their latest album 'Mylo Xyloto,' have garnered huge ticket sales, culminating in a record-breaking box office haul. Edmonton hosted the first gig on the band's globetrotting journey, with a performance on April 17 at the 16,000-seat arena, Rexall Place. Five more dates followed at venues in North America, before the tour leg wrapped up in early May with three shows at the Hollywood Bowl. All three were sell-outs, with almost 50,000 tickets sold for concerts on May 1, 2 and 4. Finished with America, the British rockers headed to Europe to play nine, yes nine, stadium tours in Portugal, England, Spain, France, Italy and Switzerland, with the latter four being sell-out gigs.

Their three show run at The Emirates stadium, London - the home of English football team, Arsenal - netted the band $14.4m, which puts them in the pantheon of bands that have scored a gross of $10 million (US$) or more in a multi-show concert engagement at one venue. They join Roger Waters, The Stone Roses, Lady GaGa and Bruce Springsteen. The band is currently on the road in Europe, and will be until late September. After that, they're set to play stadiums in New Zealand and Australia in November.