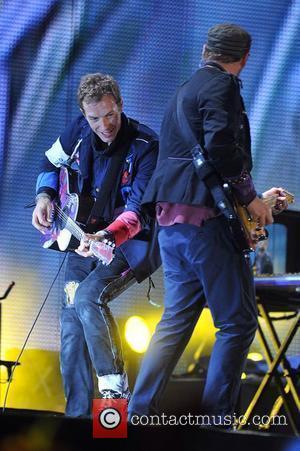 Rockers Coldplay have reportedly been approached to take over U2's headlining slot at the famed Glastonbury festival - after frontman Bono underwent emergency spinal surgery on Friday (21May10).
Organisers of the U.K.'s leading music festival are rushing to find a possible replacement for the Beautiful Day hitmakers after Bono injured his back while preparing for the band's 360 Degree world tour.
Chris Martin and his bandmates are currently working on their next album after wrapping up their Viva La Vida trek - but are said to be considering Glastonbury boss Michael Eavis' offer to play the festival next month (Jun10).
London rapper Dizzee Rascal is also believed to be in consideration for the slot on 25 June (10), according to British newspaper The Sun.
Bono, 50, is said to be recuperating under the care of a sports injury specialist and a neurosurgeon. U2 have scrapped the first show of their North American tour and are expected to make further cancellations due to Bono's back problems.