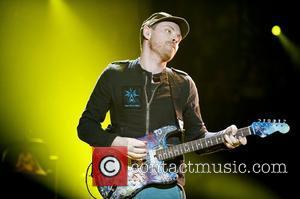 Coldplay have been named one of music's most charitable bands after giving away more than $1.6 million (£1 million) to good causes over the last year.
The British rockers have earned a place in he U.K.'s Coutts bank's Million Pound Donors Report, which names private individuals who have gifted over $1.6 million (£1 million) to the needy in the last 12 months.
The band, which performed a benefit gig for a children's charity in London on Saturday night (10Dec11), has set up a grant-giving fund called the J Van Mars Foundation and the organisation has made donations amounting to $1.9 (£1.2 million) over the last year, according to Britain's Sunday Times.