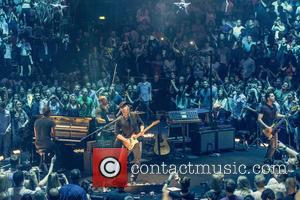 The British rocker joined the Sex On Fire hitmakers for their show at the Hollywood Bowl in Los Angeles, surprising the crowd by taking to the stage to play piano and sing on the band's track Talihina Sky.

He also joined them for a rendition of their song Notion.

As Martin took a bow and left the stage, frontman Caleb Followill told the crowd, "I hope you enjoyed that. That cost us a lot of money."