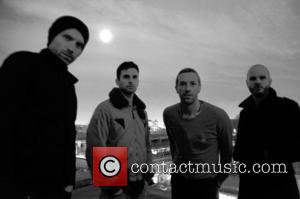 Coldplay star Chris Martin became an honorary member of Kings Of Leon on Sunday (25May14) when he joined the U.S. rockers onstage at Radio 1's Big Weekend festival in Glasgow, Scotland.

The Yellow singer was all smiles as he teamed up with Kings of Leon frontman Caleb Followill for part of the group's opening set, just hours after his band had closed out Saturday night (24Jun14) at the festival.

The impressive weekend line-up also included appearances by One Direction, Calvin Harris, Lily Allen, Paolo Nutini, Katy Perry, The Vamps, Rita Ora and John Newman, who was thrilled to be a part of the big event.

Speaking backstage, the singer said, "It's crazy, Kings Of Leon have just come onstage... and One Direction yesterday at 1pm - it's opening up strong straight away. To be given a main stage opportunity the first year I've done it solo is incredible and I've kind of got to make the most out of it.

"I've played Glasgow and I've got a weird curse about travelling to Glasgow where my bus breaks down or we're always late or something, but we always manage to get here, and every time we do get here you know it's always an incredible gig, so thank you to Glasgow."