Australian Pop Star Cody Simpson Gave A Syrian Refugee Control Of His Twitter.com Account To Tell The Story Of His Journey From His Homeland To Germany Seeking Asylum. 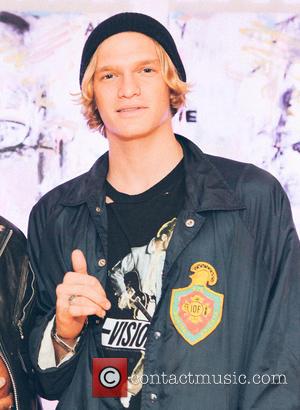 The singer warned fans that Thair Orfahli would be in charge of his page, writing, "My feed won't be the same over the next day, @ThairDamascus is taking over. It's for a special cause. See you on the 19th #ShareHumanity."

Orfahli posted regular updates during a 16-hour period recounting his trip to Germany through Lebanon, Egypt and Italy, with messages including, "On a boat to Italy w/ (with) 234 other refugees and migrants. Their strength is unbelievable... I have no passport, no money, and no clothes. Nothing. But I am happy to be alive."

The takeover is part of a United Nations campaign called #ShareHumanity, in which social media users lend their accounts "to give a voice to the voiceless" in the run-up to World Humanitarian Day on 19 August (15).

Simpson says, "I'm getting behind #ShareHumanity because it's a way of showing that we haven't forgotten that there are millions living in humanitarian crises... I hope others will join us in this massive display of public support calling for a more humane world."

Jess Origliasso of Australian rock duo The Veronicas has also joined the campaign.