One man is plotting to carry out the biggest diamond heist in history in a bid to settle a debt that could otherwise cost him his life. He decides to target one of London's biggest and most secure safe deposit facilitys; the Hatton Garden Safe Deposit Company which could bag him up to $200 million. But the youth of today just aren't up for a job of this size; if they want to carry out this theft successfully, they need to get hold of the real veterans of the game. Criminal mastermind Brian Reader, getaway driver Kenny Collins and fixer and supplier Terry Perkins are all roped in to execute the crime. On the other hand, these crooks are the very definition of 'old' school, which means they could be more of a liability than a success.

Ritchie, Downey and Law are back with another manic romp that feels more like a Victorian James Bond adventure than anything about the famed Conan Doyle characters. While it has the same comical energy, it's not quite as fun as the first go-round.

Brilliant Cambridge professor Moriarty (Harris) is up to no good, taking on Holmes (Downey) by messing with those around him, including his girlfriend-nemesis Irene (McAdams) and his partner Watson (Law), who plans to retire after his upcoming wedding to Mary (Reilly). But nothing goes as planned, and Holmes and Watson are propelled into a vicious game of intrigue that sends them to Paris where they team up with a sexy gypsy (Rapace). They also get help from Holmes' brother Mycroft (Fry) as they head to a climactic showdown in Switzerland.

Who needs logic when the action is this wildly exhilarating? And much of it is drastically slowed-down so Ritchie can show us Holmes' powers of deduction as well as whizzing bullets, explosions and other cool-looking things. The dialog is the same mix of faux intelligent banter and shameless innuendo, which gives the actors something to play with, especially as Downey and Law amusingly move beyond bromance into Brokeback territory.

But we do need some logic. This plot is so messy that it never engages us. And as it builds to a climax in a crazy cliff-perched Alpine castle, we begin to lose interest. Even with the bigger action, zingy dialog and colourful characters, this film barely works up any steam. Whenever Holmes isn't being mischievous, Downey actually looks bored. And Rapace is so sidelined that it's difficult to understand why she's here at all; the filmmakers never give her anything interesting to do.

It's a shame the screenwriters never push the characters further. But at least Ritchie keeps things moving briskly, filling the screen with comical nuttiness and big-gun mayhem. Even if Moriarty makes no sense (would someone this intelligent resort to such a ridiculous plan to make his fortune?), Harris adds heft in the role, including some jagged chemistry with Downey. Let's just hope that the requisite third film lets us in on the joke. 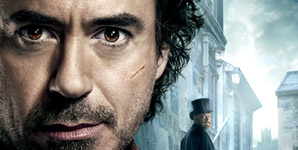