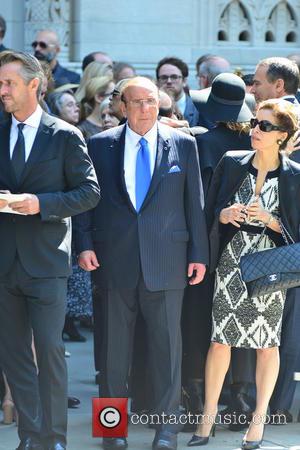 A representative for music mogul Clive Davis has blasted allegations suggesting he has been having an affair with a married woman after her estranged husband slapped him with legal papers.

Krekel is seeking access to the 82 year old's diary, travel itinerary, phone records, letters, texts and emails in a bid to prove his claim that the legendary producer has been involved in an "illicit relationship" with his fashion executive wife, Rosanna, who allegedly accompanied Davis to numerous black tie events and vacationed with him onboard his yacht in Europe earlier this year (14).

Rosanna Krekel filed for divorce in South Carolina, seeking spousal support from her ex - but he is determined to prove she was unfaithful. State law prohibits a spouse from receiving alimony if he or she has committed adultery.

Rosanna's lawyer, Robert Rosen, has denied her husband's accusations, stating, "There has been no adulterous relationship between Clive Davis and Rosanna Krekel. He's been a close family friend of Rosanna and her mother and her brother for many, many years."

And a spokesman for Davis, who gave Rosanna away at her 2008 wedding, tells the New York Post, "The allegations are beyond ridiculous. This frivolous lawsuit is clearly an attempt to embarrass his former spouse."

The record industry icon, who has guided the careers of Whitney Houston, Aretha Franklin and Kelly Clarkson, among others, has been married and divorced twice.

He came out as bisexual last year (13) after detailing a long romance with a male doctor in his 2013 autobiography.