Claudia Schiffer says ''nothing'' would ever make her walk a catwalk again because she prefers to work in an environment where large groups of people aren't looking at her. 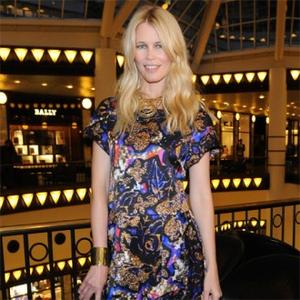 Claudia Schiffer says "nothing" could persuade her to walk the catwalk again.

The German supermodel - who gave birth to her third child last year - says she has no interest in strutting her stuff up and down runways as she doesn't like all eyes to be on her.

When asked what would get her on the catwalk again she replied: "Nothing, definitely. Nobody believes me but I'm very shy - much better in small groups of people than on a stage with everybody looking at me. I understood that I had to do it when I was modelling but now, since I don't have to do it, I'd rather not.

"Designers are very clever at trying to persuade me to do it each season and it's flattering that they do, but nothing would change my mind."

She said: "I'd much rather be working on this new project anyway."

"I want to meet all the press and buyers personally - it's that kind of project."

It was announced in November Claudia will help design the range, which will represent her personal ethos and style.

She said: "I have been looking for the right partnership for a very long time and I feel very lucky to have found it with IvA. We have the same inherent values and I was delighted to find a company that was able to interpret my vision."