A dress Vivien Leigh wore in Gone With The Wind has sold at auction for $137,000 (£91,000). The dress, worn by Leigh when she played Scarlett O'Hara in the 1939 film, was sold by Heritage Auctions in Beverly Hills on Saturday (18th April). Heritage Auctions, based in Dallas, Texas, was selling more than 150 items from the movie on behalf of a private seller. 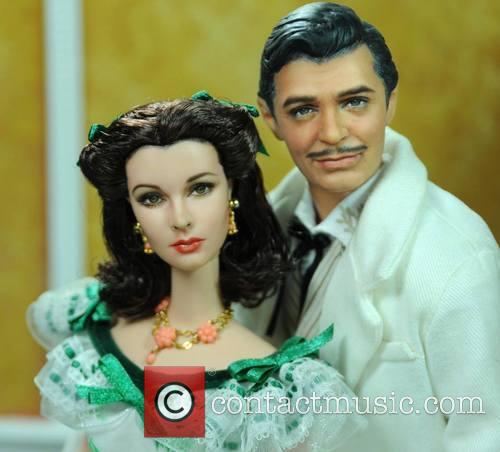 Vivien Leigh and Clark Gable dolls. The Leigh doll is not disimilar to ones sold at the auction.

Read More: Cowardly Lion Costume From Wizard Of Oz Up For Auction Along With Casablanca Piano & Other Classic Film Memorabilia.

Continue reading: Vivien Leigh's Dress From 'Gone With The Wind' Sold At Auction For $137,000

The retired actress spent her later years as an artist, accent coach and radio announcer.

Alicia Rhett, who played one of Ashley Wilke's sisters, India, in the 1939 classic adaptation of Gone with the Wind, died on Friday. The former actress, 98, passed away from natural causes at the Bishop Gadsden Episcopal Retirement Community in Charleston, a spokesperson for the community has announced.

Having starred along the beloved Vivian Leigh and Clark Gable, Rhett was one of the oldest surviving members of the 1939 cast. She had been living at the Charleston retirement community since 2002. Rhett was never married and lived a relatively quiet and secluded life, involved in the local arts programmes.

E.T Is The Nation’s Favourite Film - Thanks, Spielberg

Good old Spielberg, he made the best film ever

If three decades of quoting “E.T phone home” didn’t hint to you that E.T was the nation’s favourite film, then the official poll will have to do it.

Nostalgic voters have been thinking back to their childhoods and have decided that the 1982 Steven Spielberg epic is the best film… ever, really.

It beat out Bambi – obviously – The Goonies, The Lion King and Toy Story – a list that makes us want to heat up some popcorn and regress. E.T was a smash in the early-eighties, but has continued to rake in the cash, taking a worldwide total of $435m (£283m) and that’s not even accounting for inflation – that includes people spending $2 on a cinema ticket!

Continue reading: E.T Is The Nation’s Favourite Film - Thanks, Spielberg

By Holly Williams in Lifestyle / Showbiz on 03 April 2013

Clark Gable's son John Clark Gable gets caught by police colliding with six parked cars after backing into a first.

The son of film actor Clark Gable, John Clark Gable, has been arrested for DUI after crashing into seven different parked cars while in Malibu today (April 3rd 2013).

The 52-year-old was driving a Ford pick-up truck according to the Los Angeles County Sheriff's Department. Reports from TMZ suggest that he had crashed into 6 of the cars in a bid to escape an accident scene where he backed into an initial car apparently under the influence of an undisclosed substance. 'It appears alcohol and/or drugs were involved', a police source told the celebrity news website. The news comes with an ironic factoid; Gable used to race trucks as a younger man. We desperately hope that wasn't a long-standing career for him.

'Gone With The Wind' actor Clark Gable Sr. would be turning in his grave if he knew what havoc his heirs were wreaking; it was only two years ago when his grandson, Clark James Gable, was arrested for shining a laser light inside a police helicopter causing a significant amount of danger to both the pilot and the public. His manager at the time insisted that he wasn't aware of the felony or of any danger. John Clark Gable was taken to the Sheriff's office following his arrest and details of his charges are yet to be announced.

Continue reading: The Son Of Clark Gable Crashes Into Six Parked Cars In A Bid To Escape A First Accident Scene