Nashville Star Clare Bowen Is Engaged To Marry Her Musician Boyfriend After He Proposed During A Concert. 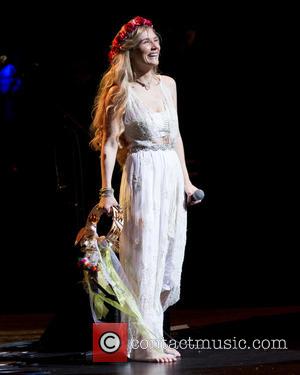 The singer/actress, who plays Scarlett O'Connor in the hit country music TV show, was performing with her partner Brandon Robert Young at The Grand Ole Opry at the Ryman Auditorium in Nashville, Tennessee on Saturday night (05Dec15) when the musician popped the question.

Clare, 31, confirmed the news in a post on her Twitter.com page, writing the word "Unforgettable" along with a picture of a love heart, and adding "Thankyou! (sic)" after receiving a congratulatory tweet about her engagement.

The news comes just weeks after the actress opened up about her battle with cancer as a child, revealing she was diagnosed with nephroblastoma, which affects the kidneys, when she was just four years old.

After cutting off her long hair, Clare wrote about her experiences with cancer in an emotional post on her Facebook.com page.

"Wanna know why I cut it (my hair) all off? When I was four years old... (I was) diagnosed with end stage nephroblastoma, after several visits to a GP who denied anything was wrong and dubbed my parents 'paranoid'.

"I'd overheard the doctors telling my family that the only hope of saving me, was an experimental treatment that might kill me anyway. But without it I had maybe two weeks left... I got really lucky. I survived, my hair grew back and I got strong again. I look relatively normal on the outside, but on the inside, I am still the same stitched back together little creature."

After her admission, Clare later thanked her boyfriend Brandon for supporting her as she went public with her story.

"I cried," she told U.S. TV show Entertainment Tonight. "(He) sat there and held me while I cried."