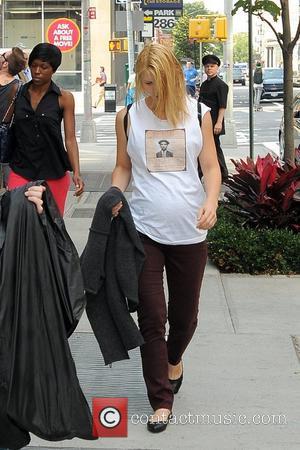 Picture: Claire Danes pregnant actress uses her hair to cover her face as she walks around in Soho New York City, USA - 07.09.12

Who is excited for the return of Homeland to TV screens? We sure are over here, and thankfully the show’s bosses have realised that we’re not alone, given that they’ve offered an almighty 20 minute long preview to satiate our desires ahead of the show’s seasonal debut on September 30th. Just over two weeks, people! Praise be!
Showtime are pros at this sort of thing, in the past they’ve put out full series premiere episodes online and The Huffington Post reports that the 20 minute preview gives you plenty to go on and mull over as you await the beginning of the season proper. You get to watch Brody (played by Damian Lewis) get some rather good news whilst viewers can also find out what Carrie (played by Claire Danes) has been doing since she got electric shock therapy in the last season. Exciting!
Homeland made its debut last Autumn on Showtime, and caused huge excitement not least because it was the first time that Danes had return to the small screen since the early 90s. The quality of the show ensured that once the thrill of that had worn away the audience still remained, whilst critically it was a huge success, even winning the Golden Globe award for Best Television Series – Drama last year.