R&b Star Ciara Is Laughing Off Rumours Suggesting She Is Pregnant With Boyfriend Russell Wilson's Child, Insisting Her 'Baby Bump' Is Just A Cheeseburger. 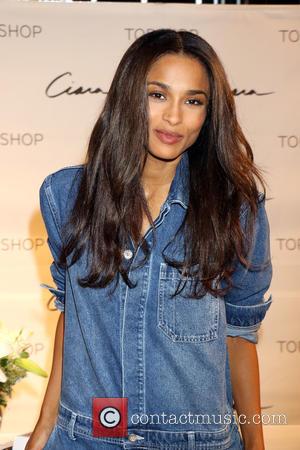 The Goodies singer previously revealed she and the American football star were abstaining from sex before marriage, in line with his Christian faith, but that didn't stop gossips from speculating about her bulging stomach during a concert over the weekend (17-18Oct15).

Side profile photos of Ciara dancing onstage with a small bump sparked a social media frenzy, but she has moved quickly to silence the baby rumours.

Calling into U.S. radio's Russ Parr Morning Show on Tuesday (20Oct15), she explained, "You know, it's so funny. I might have had a cheeseburger a little too close to showtime!"

Ciara then went on to suggest the pictures, which had gone viral, had been doctored, adding, "(My stomach) was not that big, they exaggerated that", before insisting, "I'm not carrying anything in my belly but great food."

The singer already has a one-year-old son with her ex-fiance, rapper Future, who she split from last year (14).

She began dating the Seattle Seahawks quarterback earlier this year (15) and admitted she was happy to 'save herself' for marriage.

"I feel very confident in the love that we have for each other, and only God knows where it's going to go," she recently told the New York Post's Page Six column. "God knows everything that's to come in the future, and I think it's best to let him keep taking control of things. Life is sweet, and I'm very thankful for all the great things happening in my life. I'm very happy."