Ciara is pregnant with her first child with producer fiance, Future. 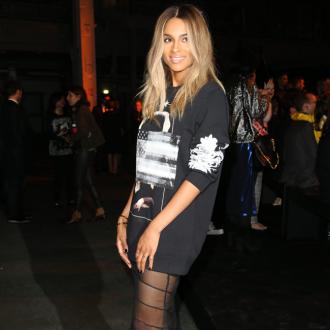 The 'Body Party' singer confirmed she and her fiancé, producer Future, are expecting their first child together on US TV show 'The View'.

When asked by host Barbara Walters if she was expecting, she stood up to reveal her sizeable baby bump and said: ''I'm so excited for this year.''

Ciara, 28, and Future, 30, got engaged in October, after he proposed over her birthday weekend with a 15-carat custom designed ring.

She later wrote on Twitter: ''Today Has 2 Be Like One Of The Sweetest Days Of My Life! #TheBestBirthdayEver. If I'm Dreaming I Don't Want to Wake up! (sic)''

Around the same time, Ciara first sparked pregnancy rumours after she was pictured wearing a number of baggy tops.

The couple plan to marry later this year and Ciara has already admitted she is heavily involved in planning the big day.

The marriage will be a first for both, although according to People.com, Future - real name Nayvadius Cash - has three children from previous relationships; an 11-year-old son, a four year old daughter, and a second son, who is 13 months old.