Supermodel Christy Turlington Has Brushed Off Reports Suggesting George Clooney Is Set To Run The London Marathon Next Year (16) After Losing A Bet With Her. 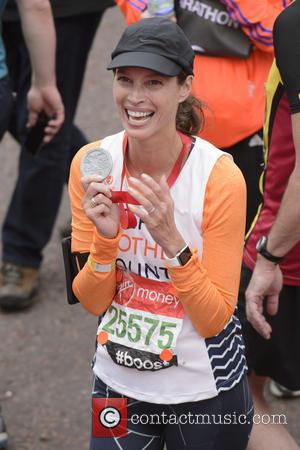 The 46 year old, who is married to actor/director Ed Burns, pounded the pavements of the British capital on Sunday (26Apr15) as she took part in the annual race, passing the finish line in a personal best of three hours and 46 minutes.

Rumours subsequently surfaced alleging she had accepted a challenge from Clooney to put a wager on her finish time in the 26.2 mile (42 kilometre) run, with the movie star supposedly agreeing to enter the 2016 London Marathon if Turlington completed the race in under four hours.

However, Turlington is baffled by the claims and has dismissed the rumour on Twitter.com.

Sharing a link to an article on Runnersworld.com, the model writes, "Who reported this nonsense about a bet? The only real thing that happened in London is my PR (personal record)."

Turlington participated in the London Marathon to raise funds for her Every Mother Counts charity, which aims to make pregnancy and childbirth safe for every mum.