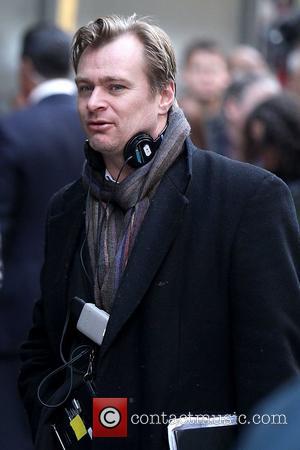 A six-minute prologue to next year's epic Batman movie 'The Dark Knight Rises' hit IMAX screens in New York on Monday (December 12, 2011), revealing key details of Christopher Nolan's third instalment of the Caped Crusader franchise.
Although the exclusive clip is set to premiere in theatres this weekend, critics were treated to a preview showing on Monday and duly reported on the important themes. The promo, screened at Lincoln Square 13 on the upper West Side, began with Gary Oldman's Commissioner Gordon eulogizing Harvey Dent, played by Aaron Eckhart in 2008's The Dark Knight. However, it soon burst into action with a clip of Tom Hardy's Bain villain - a muscly thug who breathes in a strength enhancing drug through a gas mask, according to the New York Daily News. In a sequence described as "thrilling", Bane and his henchman turn the tables on CIA agents aboard a plane and appear to get something valuable back in exchange for a prisoner, though the audience were not told what - the plane then tilts sideways and a fight ensues. Elsewhere, Anne Hathaway makes a brief appearance as Selina Kyle aka Catwoman, and a flying version of the Batmobile is also featured. Though Christian Bale returns as Batman for the third time, The Dark Knight Rises is increasingly looking to be Hardy's movie, and critics suggest he could steal the show in the same way that HEATHER LEDGER did as The Joker in 2008. In the IMAX preview, the villain is seen stalking away from Batman's broken body - a possible nod to the original DC Comics storyline in which Bane breaks the hero's back.
Filmed in New York, with scenes shot in Zuccotti Park and on Wall Street, The Dark Knight Rises is without doubt the most anticipated movie of 2012. It's slated to hit cinemas on July 20.