After the formulaic thrills of The Winter Soldier and Age of Ultron, Marvel's Avengers were in danger of getting stuck in a rut, but a smart script for this surprisingly focussed thriller kicks everything into a new direction. What's surprising is that the screenwriters have managed to incorporate a wide range of characters without the film ever feeling overcrowded. Each person has a journey to travel, so the actors get a chance to invest plenty of personality into the action. 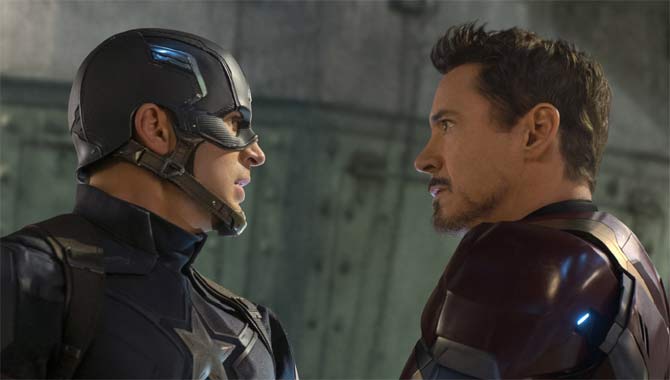 After the events of Ultron, there's a political debate about the need to oversee the Avengers' missions. Iron Man Tony (Robert Downey Jr.) thinks a special UN council is a good idea, but Captain America Steve (Chris Evans) thinks that will limit the team's ability to help people. Then Steve's best pal Bucky (Sebastian Stan) is framed for a bombing, and Black Panther T'Challa (Chadwick Boseman) is drawn into the fray. The Avengers are forced to take sides, with those supporting Bucky becoming outlaws. Tony recruits Spider-Man Peter (Tom Holland) to his team, while Steve drafts in Ant-Man Scott (Paul Rudd). And as they all face off against each other, none of them realise that this entire situation is being manipulated by a vengeful man named Zemo (Daniel Bruhl).

Watching this film requires the audience to suspend disbelief that these super-powered friends could be pushed to try to kill each other. That never quite makes sense, and indeed the script acknowledges this fact when one person goes down and everyone reacts emotionally. But the high-powered cast is so good at creating these intensely driven superheroes that it's not difficult to go with it.

Marvel can't help itself: these movies have to get bigger and crazier. And this one leaves us wondering where they can possibly go next, as it spirals into a madly funny-scary thriller that threatens the existence of the whole universe. But it also feels like a story children would make up as they go along. Still, the sparky characters and wildly cataclysmic approach are hugely entertaining.

The action picks up right after the Battle of New York (see 2012's The Avengers), and scientist Jane (Portman) is miffed that Thor (Hemsworth) didn't call when he was back on Earth. She has just started dating a nebbish Londoner (O'Dowd) when her assistant Darcy (Dennings) stumbles into a spatial anomaly that draws Jane right into the middle of a 5,000-year-old struggle between Thor's home-realm Asgard and the dark elf Malekith (Eccleston), who wants to use a swirling goo called the Aether to plunge all of existence into blackness just as the universe aligns itself. As this convergence approaches, Thor defies his father Odin (Hopkins) and turns to his disgraced, malicious brother Loki (Hiddleston) for help.

The film is overcrowded with small but pivotal characters, including stern but helpful gatekeeper Heimdall (Elba), mad-doctor Erik (Skarsgard) and Odin's wise wife Frigga (Russo). All of them help distract us from the movie's wildly shifting tone as it darts from sardonic comedy to Lord of the Rings-style battles to silly romance to dark emotion. But the best thing is the tense, unpredictable relationship between Thor and Loki, an enjoyable mixture of sibling rivalry and brotherly love that's well-played by Hemsworth and especially Hiddleston. None of the other characters really has a chance to develop around them. But at least the actors have fun with their roles, including a number of hilarious cameos along the way (there are also two post-credit stings).

Michael Bay’s going back to what he does best with his latest movie Pain & Gain. Starring Mark Wahlberg, Dwayne Johnson (‘The Rock’) and Anthony Mackie, the movie finds the director finally unleashed from the world of Transformers and back into a world of action movies and dark humour.

Pain and Gain tells the tale of a ‘gym rat’ who finds himself discontented with his life and plots to steal from a corrupt businessman, with the help of two fellow weight-lifting buddies.The trailer looks pretty neat, a fine blend of action and a sharp comic strip. Oh and Mark Wahlberg, looking distinctly beefy in his role as Daniel Lugo, the frustrated fitness freak. Pain & Gain is based on the story of the Sun Gym Gang - three guys who “robbed and extorted their way around southern Florida in the mid-90s", according to Empire online and the script appears to have been deftly handles by the Chronicles Of Narnia’s Christopher Markus and Stephen McFeely. The story was originally reported on by the Miami New Times journalist Pete Collins, back in 1999. Now, their tale gets the big budget Hollywood treatment, courtesy of Bay.

Also starring Ed Harris and Rebel Wilson, the movie is scheduled for release in April 2013 in the US and May 2013 in the UK. Prepare yourselves for a great deal of hype between now and then!

By Bill Gibron
OK
In Clerks II, uber-slacker Randal described the Lord of the Rings trilogy as a series of endless walks. Nothing but nonstop, pointless treks. One has to wonder what his reaction would be to the overwhelming ambulation in the two Chronicles of Narnia films. While The Lion, the Witch, and the Wardrobe had origins and mythos to highlight, Disney's latest entry in the franchise, Prince Caspian, requires a more minimal setup. All returning director Andrew Adamson has to offer as a result is more shoe to footpath action, with the occasional CGI-sparked battle to break up the constant strolling.

It's been a year since Lucy (Georgie Henley), Edmund (Skandar Keynes), Peter (William Moseley), and Susan (Anna Popplewell) Pevensie have been to the magical land that they once ruled as kings and queens. However, 13 centuries have passed in Narnia, and a race of humans known as Telmarines have overrun the kingdom. They have systematically killed off almost all the creatures, and rule by blood and violence. Within the court, Miraz (Sergio Castellitto), brother of the late King Caspian IX, has taken over and threatened the life of the true, titular heir (Ben Barnes). With the help of the returning foursome, Prince Caspian will rally the remaining Narnians, leading them to victory over their evil oppressors.