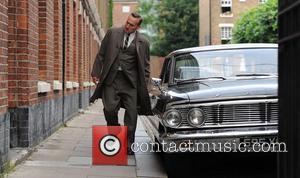 British actor Christopher Eccleston is turning his focus to the stage as he devotes the next phase of his career to the theatre.
Eccleston got his start performing classics by Shakespeare and Chekhov before appearing in a series of big-budget films, including 28 Days Later, Gone in 60 Seconds and G.I. Joe: The Rise of Cobra.
While he has enjoyed his Hollywood success, Eccleston admits his burning ambition is to be onstage.
He tells Britain's Daily Telegraph, "I've neglected theatre. That's a shame. It's why I went to train as an actor. And for the next 20 or 30 years I'm going to do more and more of it. That's the plan. I'm determined!"
Eccleston was inspired to become an actor after working as a young usher and seeing Sir Anthony Hopkins performing at London's Olivier Theatre.
He recalls, "I was an impressionable student and I'll never forget seeing Anthony Hopkins as Lambert Le Roux (in Pravda) and Ian MCKellen playing Coriolanus. I had a really extraordinary experience of seeing Hopkins dominate the Olivier then eat beans on toast in the canteen. That was fascinating - seeing the transition, the quietness of him, then the hugeness of him in the same day. What solidified in my mind was the thought, 'If you play a big classical role on the Olivier stage, you can go no higher in British theatre.' The Olivier was where I always wanted to work."
Eccleston's dream is soon to be realised - he is starring as Creon in an upcoming production of Antigone at London's Olivier Theatre.