Chrissy Teigen has revealed she and husband John Legend once got steamy under the sheets when they were flying to Thailand in first class. 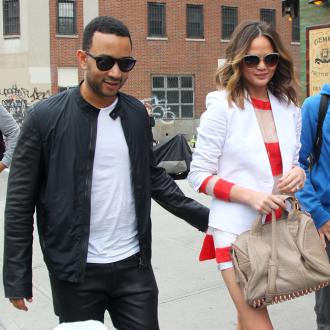 The couple - who married by Lake Como in Italy last year - got hot and steamy under the sheets while they were flying first class to Thailand to visit the Sports Illustrated model's parents.

Chrissy made the racy revelation to the latest US issue of Cosmopolitan magazine, saying: ''We were on our way to Thailand to see my parents, flying commercial first class. We were under a blanket. We weren't even in one of those pod things. I feel like we should get a trophy for that!''

Chrissy, 28, insists she and John, 35, are comfortable being openly affectionate with one another when they're in public and she says the musician likes it when she wears a dress so he can slide his hands along her thighs.

She said: ''We're by no means freaky-deaky, but let's just say, we're open to things. We're very OK with PDA. When we go to a restaurant, he loves when I wear a dress, so he can do some upper-thigh rubbing.''

Chrissy played it cool when they first hooked up after they met on the set of his 2009 single, 'Stereo', since she didn't want to scare him off and just enjoy their time together.

She confessed: ''I'm not going to lie. We hooked up. [When he went on tour] I left him be himself for a while. The worst thing you can do is try to lock someone like that down early on, then have them think, There's so much more out there. I played it cool for a long time. Never once did I ask, 'What are we?' Marriage was never my goal, because I've never been very traditional. I was just happy to be with him.''