Pop Star Christina Milian Has Penned A Heartfelt Tribute To French Fashion Designer Christian Audigier, Hailing Her Former Collaborator As A "Pioneer... Who Showed Us How To Break Rules". 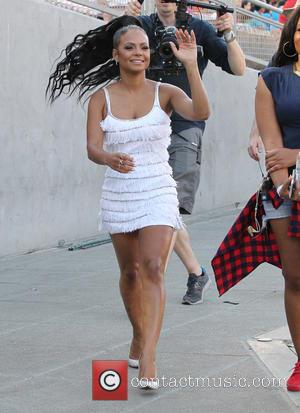 The Dip It Low hitmaker worked with the Ed Hardy and Von Dutch style guru early on in her career, teaming up to create Milian's own line of jeans, and she credits her old friend with inspiring her to launch her new We Are Pop Culture pop up clothing boutique in Los Angeles.

Milian took to her Facebook.com page on Friday (10Jul15) to share two old photos of the pair and express her sadness at the news of his death.

In the accompanying caption, she writes, "Today we lost a pioneer in the fashion world who showed us how to break rules, dream big, think big, reinvent yourself and live life to the fullest! I am Blessed to have shared the early memories at Von Dutch with him & his team on Melrose. We made the first pair of jeans with the Von Dutch patch on the back.. Hence becoming the 'Christina' Jeans & becoming one of his main staples of branding the line.

"I was JUST saying how much he inspired me in my new venture to Melrose Ave with my clothing line We Are Pop Culture. Some of the best memories of the start of my career started there... He left his stamp & his unstoppable energy with us all...

"So here's to a life LIVED! My heart goes out to his beautiful daughter, his beautiful lady! From Melrose to Ibiza! Von Dutch to Ed Hardy to Christian Audigier.. To infinity and beyond.. RIP Christian & Thank You."

Audigier passed away on Thursday (09Jul15), aged 57. He had previously revealed he was battling cancer, but claimed to be free of the disease in April (15).