Review of Say I Single by Christina Milian 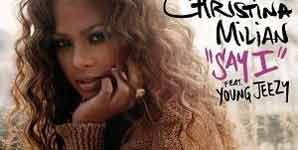 Christina Milian returns to the for-front of the club scene with a track that's had clubs jumping in the UK since last November. Its appeal has grown and grown to the point where the label would have had no option but to put it out. But thankfully it didn't get to that point because Def Jam have been fully behind the track. Produced by the Urban worlds club dons Cool & Dre and featuring Jeezey on rap. The weirdest thing about this urban monster is that it samples a 70's record from the Miracles but the way that its been used by these solid producers you could never tell it. The only down side of the record is an over repetitive chorus but nobody seems to mind this. Quite simply one of the R&B club smashes of 2006. The one unanswered question is what happened to the original version that turned up a couple of years ago by Jasmine?, we will probably never know.