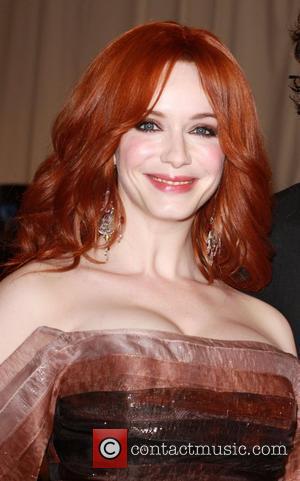 Mad Men star Christina Hendricks feared for her job on the hit show as TV bosses feuded over finances earlier this year (11), insisting the dispute left her "scared" for her acting future.
The fifth season of the drama, in which Hendricks stars alongside Jon Hamm and January Jones, was due to begin shooting in the spring (11) ahead of a summer (11) U.S. TV debut.
But executives at network Amc and the Lionsgate studio which makes the series threw the show into jeopardy when they failed to reach a renewal agreement over costs, forcing producers to push the next series back until 2012.
At the height of negotiations, bosses suggested downsizing the cast - news which left Hendricks "scared" for her job security.
She tells The Hollywood Reporter, "I was reading all that information along with the general public. A couple (of) people have already been cut out of the show, and that was very emotional for me. So hearing that - it's not like it can't happen because it's happened before. It scared me. Every single person is such a contributor and... people just love these characters."
But Hendricks admits she can understand why the option to fire castmembers was brought up.
She says, "It does feel disrespectful, but I also know they are trying to do their job and save money, and there is this whole power-play thing, and it all works itself out."
The two parties ended months of discussions in March (11), when they reached a deal to bring the hit show back for two more seasons.