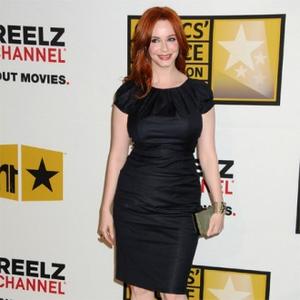 The 'Mad Men' actress feels at her happiest when she's outdoors with nature and likes nothing better than massaging the udders of the farmyard animal.

She told Cosmopolitan magazine: "I love being outdoors - I mean, you'd never think it in my high heels and pencil skirt. But I miss the smell of hay and farms and I like milking a cow!"

As well as milking cows, Christina enjoys cooking and spends a lot of time in the kitchen coming up with new recipes.

She said: "I am a good cook. There, I said it. I like to make a bit of everything and I rarely cook the same dish twice. I'm constantly trying new things."

Christina is famed for her curvy figure and says she refuses to diet to conform to the ideal Hollywood figure.

She said: "My mum was very celebratory of her body. I never heard her once say, 'I feel fat.' When I was modelling I gained 15lbs. I'd look in the mirror and be like, I look like a woman.' I felt beautiful."